03:39 – 06:03 – Are there any specific priorities or outcomes that you would like to see for Big Ocean states?

COP27 – The 2022 United Nations Climate Change Conference or Conference of the Parties of the UNFCCC, more commonly referred to as COP27.

In this week’s climate quickie we hear from Josephine Josephine Latu-Sanft an international communications specialist and native tongue Londoner. Josephine shares what COP 27 means to BOSS states, meaning big ocean, sustainable states, found in the Pacific and Indian Oceans, they live close to sea level, and are therefore more susceptible to the impacts of climate change. This is part of a broader conversation about why and how we need to reframe the representation of climate vulnerable communities. And what they want to see from this year’s COP, over to Josephine. And remember, stay curious.

Innovation and climate solutions in Africa

So COP, 27, I really looking forward to it, this will be the Africa Cup. And I think it’s a chance it’s an opportunity for people to focus on issues in countries such as in countries in Africa, and, and see what kinds of solutions or what kinds of innovations are coming out of their part of the world and also for developing countries in general, right, including small island developing states, or as we like to call ourselves big ocean sustainable states or BOSS States. And, you know, as we’ve talked about before, a lot of the time, there’s parts of the world that we we normally see portrayed, as, you know, struggling as victims are only victims of climate change. And, and who are, who just have lots of legs left, lack of capacity, lack of economy, lack of, of solutions. And I think this time, you know, being in Africa, it’s a chance to show that, look, it’s time to hear what sorts of amazing innovations and developments are coming out of this part of the world, because there are a lot and, you know, the continent of Africa has the largest youth population in the world. And what are these young people coming up with? What is important to them? You know, how are they frame? What are they seeing the issues for their future? I think the key issues, I think, this year, obviously will be finance, climate finance, whether we can finally deliver on this elusive 100 billion in climate finance that was promised in them in 2009, to help developing countries cope with climate change. And again, again, it’s it’s a lot of this, the numbers may throw you off considering 100 buildings a lot. But if you think of, of how much the the G7, the seven industrialised countries of the world, make every year, about 42 trillion. This is like 0.2% of that, right? I mean, obviously, every year, what young people what they bring to the table is always one of the most exciting things about COPs, you know, the fire, they bring in the focus and the commitment. I mean, it gives me hope, you know, it gives me hope that actually, you know, the leaders, the ones in the next generations, this is going to be they’re going to be super aware, and they’re going to be already ready to make the decisions of that. It’s just that, you know, should we have to wait for that? You know, and or should we actually put them in the leader seat now? Because they seem like, clear about this?

Are there any specific priorities or outcomes that you would like to see for Big Ocean states?

And do you think like suppose specifically for and I love this new acronym, big ocean sustainable state

Are there any specific priorities there that or specific conversations or outcomes that you would love to see?

For BOSS states, big ocean states, I think, for us naturally being in the middle of the ocean, we’d like to see more on the what they call the ocean climate Nexus. So a lot of the climate conversation is driven about cutting down emissions. That is the overarching goal is about cutting down the carbon emissions in the atmosphere for us because our livelihoods in our lives revolve around the ocean, we need to bring we think we need to bring that more powerfully into the conversation. I mean, the ocean is the greatest carbon sink it holds and sucks more carbon than the rainforest, right? But in doing that, it’s it affects the organisms down at the bottom of the ocean, the corals and all of them it warms the oceans and that changes the environment for marine species and therefore, the marine species that we depend on for our ocean economies, etc. I mean, the environment that we depend on for our economies, and, and again, the ocean covers 70% of the earth. It is a huge has a huge role to play in the climate system. But because it’s so vast and it’s always there, we don’t really we haven’t it is nowhere in the Paris Agreement except maybe one or two mentions as a carbon sink. Right. So, it’s funny, right? Because people think like climate and oceans that kind of the same, but it’s not it’s actually it when you come to, to the COP negotiations, it’s always like a side event or, you know, it’s not in the agenda, but I think we’re making a lot of progress on that, you know, thanks to the advocacy of island nations. So that’s a priority for us. And also, you know, when we talk about, you know, what our priorities were this year, you know, these are the same priorities. It’s addressing climate change. At ramping up ambition, it’s been the same, since for decades, we haven’t gotten there, we’re inching forward, but we need to move faster. So a lot of those messages are going to be the same, right. But but they’re important doesn’t diminish the importance of that. 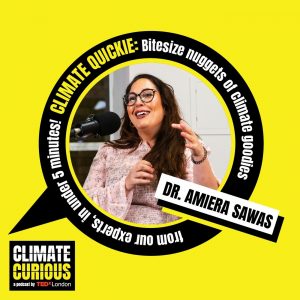 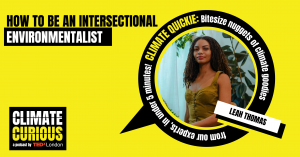