Teach the future – Teach the Future is a youth-led campaign to urgently repurpose the entire education system around the climate emergency and ecological crisis.

Adeem Zahawi – Nadhim Zahawi is an Iraqi-born British politician serving as Chairman of the Conservative Party and Minister without Portfolio since 25 October 2022.

In this week’s climate Quickie, we hear from the youngest policy writer in the world, most known for being one of the leading organisers of the school climate strikes 18 year old climate justice activist Scarlett Westbrook. She shares how you can write a climate bill and the policies on your street. Other ways you can channel your interest to get involved in the climate. Let’s head over to scroll it to hear more. Stay curious.

Hi, my name is Scarlett Westbrook. I’m an 18 year old climate justice activist, most known for being one of the leading organisers of the school climate strikes and the youngest policy writer in the world. When I was 12 years old, I decided to take my a level on government politics. Five years earlier, because I was really interested in climate I was really interested in policy and also in politics, and force qualification, I got to specialise in climate policy and education policy. A few months after I completed the qualification, when I was 13, I became one of the organisers of the British school climate strikes, and the climate strikes had four demands. The second being teacher feature, after having had the strikes happen a few times over a few months and having met with politicians, we realised quickly that Teach the Future actually was so comprehensive, that it needed its own separate campaign and its own separate policymaking force. So given that I had this academic experience are quite limited, because it was just a level, I decided to write a book on climate education along with the other volunteers at Teach the Future. And because I had this, like political policy experience, I got to lead on that. With this qualification it took early.

So when we wrote the bill, I was 15, which sounds so tiny now. And it was called the climate education bill. That’s what it’s called now, because we’ve had three years in between now and then there’s been revisions to it. And essentially, if passed, this bill would mean that climate education has centred into every single subject in every education stream, whether that’s a levels BTEC apprenticeships, primary schools, secondary schools, to make sure that we’re prepared for the future that we’re going to inherit. Right now, climate education is limited to optional subjects, like geography, or triple science. But the thing is, not everyone who’s going to be impacted by the climate crisis is going to be a scientist or a geographer. So we need to make sure everyone’s aware of how their interests and how their future job is going to be impacted by the climate crisis. It means learning about risks to biodiversity and food tech, or looking at firsthand texts from people on the frontline of the climate crisis in English, looking at the political implications in politics, and the actual root of the climate crisis in geography, and learning about the history of colonialism and how that drove the climate crisis in history or in a BTech in construction, looking at how we can insulate homes more effectively, having green apprenticeships, all of these sorts of things. And some parts of the bill have actually been adopted, which is a massive win for our campaign to act COP 26 and Adeem Zahawi announced that climate education is to be introduced in Paris was for the first time in 2023. And they’re going to start to decarbonize some schools through the introduction of green energy pods instead of boilers. So it’s tiny baby steps. But its enormous for a campaign that’s driven by school students to have made so much progress, though, we want so much more.

So I started doing more, I guess, mainstream climate activism, when I was in Year 10. So just at the start of my GCSEs, and I went to a fairly strict school where you couldn’t use your phones at all. And then one day in year 13. So actually, this year, I got told the day before that I was to present evidence at a at the Education subcommittee in a select committee is basically a panel of politicians, industry experts, and leading researchers. So it was a really big opportunity in like a really valuable place to be talking about climate education and the need for Climate Education. However, it was right where my lunch hour was. So it wouldn’t make sense to like take a day out or anything because it was so short, because there’s only an hour because I had like a lunch hour there. So I went to my favourite teacher who actually only taught me in year seven. So if you hadn’t told me for six years at this point, and asked her if I can use her lab because she was a physics teacher. And she said yes, and let me use her laptop. So I was very lucky because I got to like present evidence and select committee without getting caught without getting my phone confiscated.

I think what’s really exciting about this bill is that it’s interdisciplinary. And it’s acknowledging how every single person, regardless of what profession they want to go into, or what subjects they’re interested in, is going to be impacted by the climate crisis. So our education system should reflect that. That’s the approach we need to be taking to our own individual climate action to mean to look at what we enjoy and what our strengths are, and then translate those into climate action. There’s lots of weight behind individual change and pressure on us to think that were responsible for solving the climate crisis. But that’s not the case. This is a collective battle and a struggle that we’re going to have to win collectively. So we need to think about our skills and how they complement each other’s. There are people who helped with the press releases, who cleaned up grammar, who emailed their MPs asking them to support it, and just so many different people who’ve all had a part in it. And I think that’s like the most important thing essentially how we all come together to do things. No one person is going to save the world. But if we all believe that together we can I think together as a community, we’ll be able to do that. If you want to know more about Teach the Future, you can visit our website at www.teachthefuture.co.uk or you can check us out on social media at _teachthefuture. 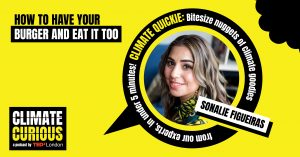 Sonalie Figueiras Climate Quickie: How to have your burger and eat it too 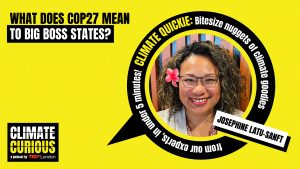