Welcome to The Kindness Economy

How do you connect human kindness with commerce? Rising through the ranks of the retail sector in the late 1980s and 90s, Mary Portas learned to put profit first and people second. By the time she was 31, she was on the board of Harvey Nichols as their Creative Director. She had money, she had power and she had some very nice clothes. Mary played the alpha business game and whilst she was really good at it, something never felt quite right. It wasn’t until 2012, when her youngest son was born and her eldest son went off to university, that it hit Mary: the world of work wasn’t kind. And that needed to change. With the help of her team at her agency, Portas, Mary decided to put people first, and re-structured the agency around the values that would free everyone to be their most authentic selves at work. It was then she realised that kindness isn’t weak but strong: a foundation from which to grow a business that has truth, integrity, longevity and commerciality. As we move away from a time of rabid consumerism and ‘peak stuff,’ Mary believes we are entering a new type of economy. One built on kindness and a Triple Bottom Line: people, planet and profit – in that order. And business who organise themselves around this kinder way of behaving, will be the ones that win. A determined, passionate advocate of the social role of retail, Mary is at the forefront of making the nation better consumers and the country’s shops better businesses with her team at her agency Portas. Her latest project, Work Like A Woman, is a manifesto for change and the book and podcast of the same title are being used by businesses across the UK to create positive change within their organisations. In recent years, her work life and personal life have become increasingly intertwined, focusing on the things she cares most about: making our world a fairer, more kind place. One of Mary’s proudest achievements to date is her ‘Mary’s Living and Giving’ charity shops in partnership with Save the Children. There are 26 shops across the UK now and these have raised over £22 million for charity. This talk was given at a TEDx event using the TED conference format but independently organized by a local community. Learn more at https://www.ted.com/tedx

Global retail authority and advocate for The Kindness Economy 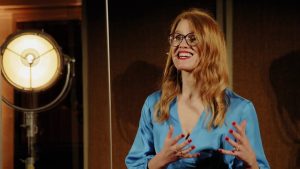 Why squiggly careers are better for everyone

Why I talk to white supremacists