Tess Lowery
A storm-proof megawatt solar farm is helping communities hit by hurricanes get back on their feet more quickly – thanks to reliable energy supply says the Managing Director of RMI’s Global South Program, Justin Locke, on the latest Climate Curious by TEDxLondon. And with Hurricane Fiona hitting Puerto Rico five years to the day after the devastating Hurricane Maria, we know we need to build resilience to these increasingly incurring extreme weather events, fast.

But even after the initial devastating hit, the disaster is far from over. Why? Power outages. Everywhere.

Justin Locke, the Managing Director of RMI’s Global South Program, has helped develop and build storm-proof megawatt solar farms which help communities hit by hurricanes get back on their feet. But they also do so much more. They’re better for the environment, more equitable and create more jobs.

Now we just need the people power to build them.

In case you hadn’t noticed, every year like clockwork, hurricanes hit North American countries. It’s actually known as “hurricane season,” a period of the year usually from June through November when tropical cyclones form in the Atlantic Ocean.

Wait, I thought you said “hurricane.” Well, technically hurricanes, cyclones and typhoons are all essentially the same thing.

All three are storm systems with winds exceeding 119km/h (74 mph). The name differs based on where in the world the storm happens.

The Energy Crisis From Hurricanes Irma and Maria

It’s 2017, Hurricane Season. Two category 5 hurricanes (the highest classification in the scale) took place: Hurricanes Irma and Maria between 10 days of each other. They devastated about five or six islands across the Caribbean. It was global news for many months, headlined by Puerto Rico.

The National Hurricane Center issued its final advisory for Irma on Monday night, September 11, 2017, but for millions of people left in the storm’s wake, the disaster remained far from over. One stark reminder? Power outages. Everywhere.

“This was a disaster characterised by impacts to the energy sector. Multiple islands lost power for multiple months. Primarily because these islands rely on diesel generation with overhead transmission distribution lines: a highly exposed energy system.”

But, at the time we also had several solar arrays that were powering part of these energy systems in these countries. A solar array is a large, centralised, solar plant. Like a solar farm. Several of these solar systems took direct hits from the hurricanes.

If the islands were going to move through the energy transition, they were going to have to build systems to withstand these storms, because as with most extreme weather events, they’re going to get worse in the future.

Several systems were destroyed, but several survived. “We needed to figure out why,” says Justin.

So they commissioned a study and determined why the ones that survived, survived. They created a report called ‘Solar Under Storm’. This report set the industry standards for the design and construction of these plants to withstand these storms in the future.

Then they worked with the government of the Bahamas — known as Hurricane Alley because of the amount of hurricanes that happen there — to install a one megawatt solar farm designed with these design standards for the first time ever.

A few years later, Hurricane Dorian (another category 5 hurricane) rips through the Bahamas.

The entire power system goes down. Except this new solar array. It was producing power not only during the storm, but immediately afterwards. It survived without a scratch. The concept was proven.

“What was more important was the human element of this. Upwards of 90,000 people lose power for multiple weeks. That system was interconnected with a national stadium, which then became the national shelter. That was one of the few places that had power where medical supplies could be plugged in, you know, communications can be plugged in and actually was the lifeblood of that island for several weeks until power was restored. So you can see the benefit of a decentralised solar system like this.”

What is a decentralised system?

It comes down to the fact that developed economies all built the same kind of energy systems: a large, centralised, fossil fuel plant far away from where we all live, transmitting power across long distances through overhead lines to where we people and businesses consume it.

But the further away you are from where the power is generated, the more likely you’re going to have a disruption to your power. Because there’s more things that can happen along the way.

Amory Lovins, the founder of the RMI, had a different vision of how energy systems should be designed: a more decentralised architecture where you have smaller generating assets, that are actually part of the natural landscape, closer to where people and businesses consume that power, fueled primarily, not with fossil fuels, but with renewable energy. This is what we refer to as the distributed energy resource.

What Amory didn’t realise at that point was that it’s actually a more resilient system, both from a climate impact perspective, and from an economic perspective.

Why the old energy system is inequitable

We rely on power for everything from health to education facilities. How do you get money out of the bank? It’s wired through an electronic system.

These critical facilities are what allow us to function and provide equity to us.

Every critical facility should have a decentralised energy resource that is interconnected with it to ensure that if anything happens to the central system, that power is still maintained through that distributed energy resource.

So when Puerto Rico lost most of its power, Justin’s team was busy deploying micro grids to these critical facilities, which are all up and running right now.

When COVID-19 happened, all the hospitals in New York were maxed out in the early stages.

What would have happened if any of those hospitals lost centralised power?

They might have had some diesel backup, but diesel runs out pretty quickly.

That’s why Justin believes that “every hospital should have an interconnected system, a distributed resource that ensures a power supply no matter what happens.”

Going Down The Decentralised Path, instead of the Fossil Fuel Route

Could this help communities that don’t have access to power right now, instead of them going down the fossil fuel path?

In a nutshell, yes.

Global south developing countries are developing their economies for the first time now. So we’re not waiting for big fossil fuel assets to be decommissioned and replaced. These countries need to build energy now. And that’s where all the global growth of energy is going to happen.

“We often say the global climate crisis will be won or lost in the Global South. And distributed resources are that optimal pathway to develop and what we refer to as a leapfrog opportunity. You can leapfrog from the 20th century fossil fuel systems to the 21st century distributed energy resource systems.”

In Africa, we have the majority of the unelectrified population of the world. Millions of people live in Africa without any access to electricity.

The way we addressed this in the Global North is that we subsidised this energy build out of transmission lines to everyone living everywhere in our countries. But fossil fuel infrastructure takes a long time to build, it’s really expensive, and then it’s there for 70 years.

With distributed energy resources, you don’t need to build out that infrastructure. You don’t need to build a transmission line 250 miles into the middle of nowhere. So in places where there is no plant and no infrastructure, instead of having to build fossil fuel infrastructure and then transition away from it, those places can jump from wherever they are now to an electrified future that is renewable, clean, and local. The cherry on the cake? It’s the cheapest way to get power to the over 700 million people globally currently living without power.

Sounds like a no brainer. So why isn’t everyone doing it everywhere?

Firstly, the fossil fuel economy wants to maintain the status quo. Justin goes so far as to say that “certain political parties have aligned to protect those interests.”

The other issue is that if you’re electrifying, a village of 100 people right in the middle of the Sahel, that’s a pretty small system. So the cost of getting that small system out into the middle of nowhere, is going to have a much higher logistical cost and therefore an overall cost to get it there. Often, investors just don’t want to make that investment because it’s too expensive and small-scale.

How do we make it more attractive to investors?

Rather than just saying, “Hey, we want to electrify this little community out here, or we want to create a resilient microgrid at this hospital in Puerto Rico, we say why don’t we look at a portfolio of investments?”

Basically, you offer up 100 communities as a package instead of one. Which starts to make it look worthwhile to financiers. It’s called aggregation for scale.

The bigger picture? In order to reach a 50%reduction in global emissions by 2030, we need to create 14 million new jobs globally. And another 16 million jobs need to be transitioned from the fossil fuel sector into clean energy.

But there’s not enough people. So when we talk about why this transition isn’t happening, it’s because we don’t have the workforce to build this stuff.

Ultimately, we have to build all this new infrastructure, right? We’re going to need engineers, project managers, project developers, and more. Right now, we don’t have that.

But ultimately, this is a way to create good paying jobs, equitably because everybody needs power.

What is an intersectional environmentalist?

How a grassroots rebellion shut down big coal 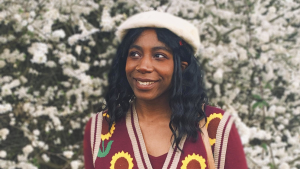 How to find your climate joy