“We can’t unsee what we’ve seen”, Sarah Sibai, organiser of TEDxHamra, based in Beirut, told us at our most recent TED Circles event.

Sara and other members of the TEDxHamra community joined us virtually for our August TED Circles on the theme of ‘How Change Happens’, during which we reflected on how communities come together after shocking events and call for change. Sara and the TEDxHamra team not only shed light on the situation in Beirut, but also shared their own personal perspectives and hopes for the future.

Sara (as shown in the picture) highlighted how, for many people, the explosion that ripped through Beirut on the 4 August 2020 was a tipping point. “Especially during COVID, the broken system has been brought to the forefront for everyone to see. We are forever transformed, now is the time to build back better, what was previously the norm cannot be allowed to go on. We strive for and embrace the creation of an improved progressive new world”, she explained.

Before the explosion at the Beirut Port, Lebanon was already grappling with the current coronavirus pandemic and pre-existing socio-economic troubles. For many of its citizens, this tragic event is a part of much more extensive and complex current issues, in particular the sharp decline in the value of the Lebanese Lira and socio-economic problems and mass protests this has led to. The blast was a result of 2,750 tonnes of ammonium nitrate accidentally detonating.

Sara spoke to our audience, which included over 50 participants from several countries, about the importance of community in the aftermath of the explosion. It was the community, non-profit organisations, charities and ordinary citizens who came together to support each other. They created a sense of unity and solidarity that went beyond the different sects within Lebanese society in a way never previously seen. While from a global perspective it can be easy to disassociate ourselves from events taking place elsewhere, Sara highlighted the importance of the global community’s support and how it can directly affect local communities.

Like all Circles event, we went on to watch and discuss TED talk(s) around the theme. In this case, we discussed Naomi Klein’s TEDGlobal talk, ‘How shocking events can spark change’. Naomi’s talk explored why certain cataclysmic events jolt people into action more than others, and how those that do can lead to longstanding positive change.

Naomi highlights that, “from history, we know it’s possible for a crisis to catalyse a kind of evolutionary leap”. But this no longer seems to be working in our world of non-stop shocks – our collective alarm as a society is broken. She argues, we have stopped responding to the overlapping crises we face with the urgency they require. The danger Naomi says, is this pushes society backwards to become more unequal and unstable. She refers to this process as the ‘Shock Doctrine’.

Naomi proposes deep transformative change can only be catalysed by shocking events if we add two additional key ingredients: utopian imagination and movement organisation, “because it’s in the interplay between the two where revolutionary power lies”. Naomi says it’s when you combine all three ingredients that you get “The Leap” – the moments where people step up and find the capacity and strength to change their local and global communities.

Want to get involved?

We’re very grateful to Sara and others from the TEDxHamra team for taking the time to join us and make this Circles event so special. You can find out more about the ongoing situation in Beirut and how you can take “The Leap” to help after this shocking event below.

TED Circles are an initiative created by TED, where small groups of people come together to discuss various talks by TED and TEDx speakers. Sort of like a book club but for TED talks!

Find out more about the ongoing situation in Beirut:

Who’s doing what on the ground:

We’re running TED Circles on current issues every month. Please subscribe to our mailing list to be the first to hear all the details and how to register for our next events. TED Circles are free to attend and will be run virtually for the foreseeable future. 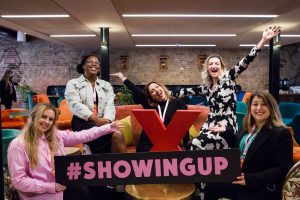 Why we are focusing on climate this Pride