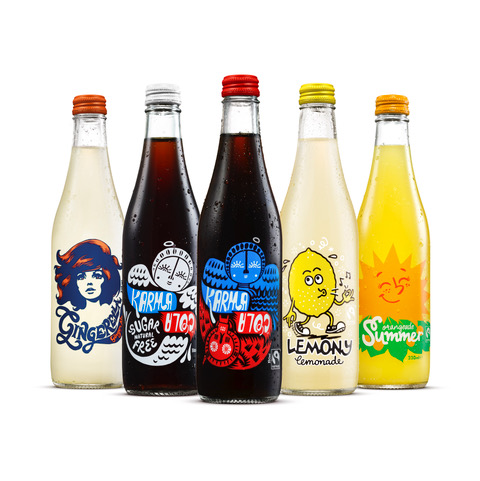 Karma Cola is an ethically sourced organic soft drinks brand proving itself to be an ambassador for the Fairtrade business model. We met up with the head of the Karma Cola Foundation, Albert Tucker, to find out how they work.

Conscious consumerism has been à la mode for some time, but with a plethora of items backed by big business, brands like Karma Cola are signposting their ethical values and practices to stand out from the crowd. In the UK, the soft drinks market is estimated to be worth £1.3 billion. The design-led drinks brand is catching on because it has community at its heart – the community it supports and the international community it has built.

Founded in 2012, the New Zealand-based brand empowers cola plant farmers in Sierra Leone through the work of its foundation. The brand’s ethos is in its slogan – “What goes around comes around”. The ethical and sustainable Fairtrade rival to one of the most popular drinks in the world, it gives 3p of the price of every bottle sold goes to cola nut producers in the region. Their contribution to the fair trade landscape was recognised in 2014 when the company won the inaugural Fairtrade Awards’ ‘Fairest Trader’ accolade for their work.

Karma Cola Director and Chairman of the Karma Cola Foundation, Albert Tucker, grew up in Sierra Leone. With over ten years’ experience of working at a senior level with Fairtrade brands, he joined the Karma Cola team with the objective of promoting developmental trade. “I became tired of the narrative that poor farmers are not able or capable of doing business. Given the right opportunities and the right training, they can be empowered to do business like everyone else,” Albert said.

Many people are unaware that the majority of cola drinks, including Coca-Cola, do not include real cola – a derivative of the cola nut grown in Western Africa. Karma Cola supports their farming community with a hands-off approach to decision making, allowing the locals to prioritise projects as they see fit.

“People always ask me – do the farmers really make their own decisions? I tell them I’ve been in fairtrade for a long time. Do you think we would have told them to build a bridge with the money they make? That’s one of the first things they decided to do to join the old and new parts of Boma village and we support their choices,” Albert added.

The foundation now works with over 2,000 people in the village of Boma and the surrounding Tiwai region on the Moa River in Sierra Leone’s Southern Province.

Following Karma Cola’s success in London, the team recently launched an eye-catching ginger ale nicknamed Gingerella (which uses organic ginger from Sri Lanka) in time for celebrations on Redhead Day UK 2018 (19 May) and have also added a ‘Lemony’ lemonade and ‘Summer’ orangeade to the collection. Each drink has a distinct personality and a story that the team hopes fans will link back to their original ethical objectives.

Back in Sierra Leone, the cola nut continues to play a symbolic role in wedding rituals, traditional offerings and is even broken in some areas to affirm a business deal. Chinua Achebe famously wrote in Things Fall Apart, “He who brings Kola (cola) brings life”, so at the very least the Karma Kola team are trying to build better lives for the custodians of the humble fruit.

All photographs courtesy of Karma Cola.